I do not know about you, but when I was in high school playing football, I don't believe I could have kicked a 64-yard field goal. I was an above average (All-County/All-Region) Cornerback/Safety in a great program, but there was no way in the world for me to fanthom the kickers on my team or any other team that we played against kicking a 64-yard field goal!!!

When you read the article below, you will see that Austin Pacheco did just that; he kicked a 64-yard field go with little bit to spare!

The great thing about the story is that Austin received props from the other team! Great sportsmanship, great kicking ability and what a gutsy call by Austin's coach!

Congratulations to Austin and his team, and I hope Austin continues to kick the ball well because it looks like he has a bright future!

Enjoy the article! One Love!

By Cameron Smith
On Friday night, Carson (Nev.) High placekicker Austin Pacheco did something at the high school level that no one has ever done in a competitive NFL game: He hit a field goal from 64 yards out. 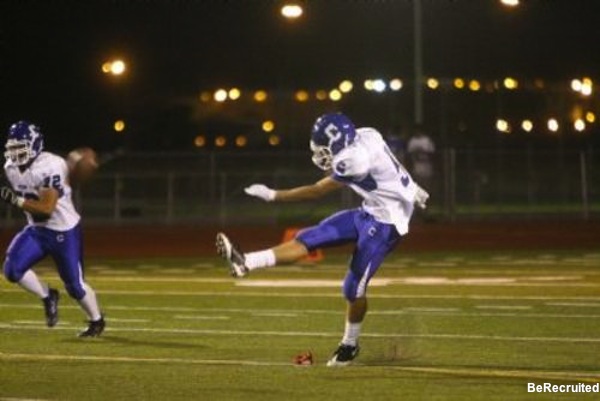 As reported by the Associated Press and Carson City Nevada Appeal, Pacheco drilled a 64-yard field-goal attempt with 27 seconds remaining to lift Carson to a 27-24 victory against Bishop Manogue (Nev.) High School.

"I'm still in shock," Pacheco told the Nevada Appeal. "I knew it was good as soon as I hit it. The snap was perfect and the hold was perfect. The wind was blowing to the right and I played it perfectly.
"I wasn't surprised that coach let me try. He told me before the game that anything 65 and under we had a chance. We did what we could do."

Pacheco's kick stands as the second longest in Nevada state history, behind a 1985 68-yard effort from Reno (Nev.) High kicker Dirk Borgognone which stands as both the Nevada and national high school record. Pacheco's kick was also long enough to tie for the fourth-longest field goal in high school football history.

Perhaps most strikingly, Pacheco's kick actually came from farther out than any NFL kicker has hit from in a professional game. Raiders place-kicker Sebastian Janikowski connected on a 63-yarder in his team's season-opening victory against the Broncos to tie for the longest in league history, but that kick was still a full yard shorter than the one Pacheco hit on Friday.

While everyone on the Bishop Manogue sideline was stunned to see Pacheco line up to attempt the game-winning field goal, his own coach said he never doubted his decision to attempt the field goal then and there, rather than go for a first down with his team facing a fourth-and-13 situation.

As you can see above, the kick would have been good from even farther back. 70 yards? It sure looked like it had a chance.

"I don't know what to say," Carson coach Blair Roman told the Nevada Appeal. "You might have to wait a minute.

After the game ended, even Bishop Manogue coach Paul Mills was still struggling to come to grips with the fact that his squad had just lost out to a 64-yard field goal. In fact, he was still stunned that Carson even had the gumption to attempt one.

"We knew it was going to come down to the wire," said Mills. "One of the kids on the sideline said the tee's out there and I was thinking the tee from the previous kick. Then I'm looking out there and they're lining up for a field goal.
"The kid nailed it. My hat's off to him. That's a great job in a very pressure-filled situation. Wind-aided or not, he got the job done and there's a lot of variables when you're kicking that far."