Why are some of these young athletes dying?

Per Wayne Staats of the Augusta Chronicle, Burke County High School head coach Eric Parker confirmed the offensive lineman collapsed Sept. 22 and was transported to Georgia Regents Medical Center.
"We were initially told he had some drastic sudden event with his heart," Parker said. "We were hoping and praying he would come back; it just wasn't meant to be."
Additional details about Williams' death were not available in Staats' report, but following the team's practice Monday, Parker noted the young man took a "turn for the worst."
Parker also told Staats he wasn't entirely sure how the team was going to respond upon learning about Williams.
"Stuff like this puts things in perspective," said Parker. "We're going to try to keep things as normal as possible. I think as time moves on, we'll be fine. What I'm not certain about is right this moment."
Even though the circumstances are different, the New York Post and the Associated Press published a story Monday, following the death of a Washington state player, noting there have (now) been five deaths involving high school football players this season.
No comments:

Thrown across one of his shoulders was a small knapsack, while his svelte arms toted a yellow, human-sized garbage bag full of soaked jerseys and gym socks.
Preparing for an NBA assignment, perhaps?
"I'm the youngest on the team. Rookie duties," the Croatian phenom said.
Bender, an impossibly gangly 7'1", 216-pound 17-year-old currently playing for European powerhouse Maccabi Tel Aviv, appears to be a surefire 2016 NBA draft lottery pick.
Though he turns 18 on November 17, June 2016 is distant on the horizon, and Bender has a world of hype to validate in the interim. His first major NBA audition for scouts comes this week as Bender and Maccabi headline a two-part exhibition series with Italian club Emporio Armani Milan (owned by fashion icon Giorgio Armani) in Chicago on Thursday and New York on Sunday.
Houston Rockets draft-and-stash (via Minnesota Timberwolves) Alessandro Gentile will also play in front of his NBA rights-holder's representatives. But for every other NBA team—over half the league will send scouts—all eyes are on Bender.
With Maccabi, Bender has quickly proved himself capable over seven preseason games, hitting double digits in points five times thus far. Coaches and draft analysts have high hopes, and he's already earning comparisons to 2015 draft show-stealer Kristaps Porzingis.
"I didn't know what to expect of Dragan," said Maccabi head coach Guy Goodes. "But he surprised me. He's still learning how to play at a high level, makes some mistakes, and forgot a few defensive assignments. But he's young and has given us solid 15-20 minutes per game.
"The only thing '17 years old' about him is his mustache."
Bender still has plenty of development ahead, typical growing pains any 17-year-old faces: long-range precision, composure in traffic and toughness in the paint, most notably. But his Maccabi coach is mostly bullish on his upside.
"He is focused on the mechanics of his three-point shot, which is something he invested a lot of work into over the summer," Goodes told Bleacher Report. "His game has matured from the minor league, because he is playing with better players and isn't the center of attention. He hit some wide-open shots, has active hands, changed shots and got deflections. Still, he needs to improve his penetration under contact. He struggled with that a bit. His body is extremely long, so he can get defenders up in the air, but it's a learning process."
This time last year, DraftExpress scout Jonathan Givony projected Bender being the No. 13 pick in his 2016 NBA mock draft. Since then, his stock has risen.
vony spent time monitoring Bender in the flesh at Basketball Without Borders and the Adidas Eurocamp in Treviso, Italy, after which he bumped the Croatian prospect up to No. 5 on his mock board.

"How do you find a 7'1" kid that's 17 years old, that is skilled with such a feel for the game like Dragan's? It doesn't exist," Givony told Bleacher Report. "Compare where Dragan is now to where [New York Knicks No. 4 pick] Kristaps Porzingis was at the same age, and there's no comparison. Bender is way ahead in terms of how polished he is, creativity, versatility and his body. I was watching some of his games from preseason in France and Israel, and he is huge.
"His body made a huge jump this summer. Every time I watch him, he is better, stronger; his jumper is better, his ball-handling, he runs coast-to-coast, dishes off. … NBA teams will fall in love with him."

Bender's trying not to get ahead of himself, too. "I don't know, but I'm sure a lot of NBA scouts will be watching me [in Chicago and New York]. I couldn't play in the Worlds, so this is a good chance for them. But I'm not thinking about that so much, I'm going to play 100 percent on both ends of the floor and focus on winning," Bender said in a conversation with Bleacher Report.
Sources told Bleacher Report that almost all NBA teams have issued passes to watch Bender, with the Denver Nuggets, Philadelphia 76ers and Orlando Magic engaging in discussions with Maccabi officials. The Boston Celtics, Brooklyn Nets, Dallas Mavericks, Memphis Grizzlies and Milwaukee Bucks have also been issued credentials.
"I've been told that lots of scouts will come to see Dragan, but I'm not sure who specific. It's the best time for scouts. There is no high school basketball, no college games and no Euroleague. All 30 teams should be here," Vujcic said.

Maurizio Gherardini, former vice president for the Toronto Raptors and the current director of Adidas Eurocamp, believes Bender will be the top choice from Europe, and that there isn't much competition.

Assuming Bender declares, he will have plenty more mountains to climb. Without the ability to take over offensively, finding the right fit with his first NBA team will be huge for Bender's basketball career.
"It doesn't matter if he's drafted one, five, nine or 11. Who cares? That's just one day," said Givony.

"Dragan needs to get through his rookie contract, because he won't fit in with every team. He will never be a dominant force or a No. 1 scorer for a team. He isn't LeBron or KD. Dragan does a little bit of everything. That's his game."
In advance of Bender's American debut, Bleacher Report sat down with the Croatian prospect for a brief Q&A about his immediate and long-term basketball future.

Bleacher Report: Whom do you mimic your game after? 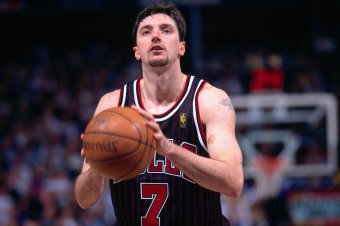 Dragan Bender: My idol is Toni Kukoc. I used to look up to him, but now I learn from Dirk Nowitzki and Nikola Mirotic. I like to steal some of their moves and use them in my game.
For example, Dirk's shot—it's impossible to shoot like him, no one can—but some things like his IQ and how he sees the floor. I liked Mirotic when he was with Real Madrid, and I followed his adjustment from Europe to the NBA. He was running for Rookie of the Year.

B/R: Why did you choose No. 3 for Maccabi Tel Aviv?
DB: I wanted No. 7 like Toni Kukoc, but it was taken. I've had No. 7 since the juniors. Also, last season in Ramat Gan, I wore No. 7. But I took No. 3 because it's a cool number, and for Drazen Petrovic, who is a legend in Croatia.

B/R: What have you learned since joining Maccabi?
DB: I feel the difference between the second division and Maccabi, my game has matured after last season. I understand the game more and how it feels to be a foreigner on a team in a different country. I've been practicing with Maccabi on and off since I was 14 years old under David Blatt. I learned a lot.

B/R: Are you going to enter the 2016 NBA draft?
DB: I have no idea. I'm not thinking much about the NBA. My focus is with Maccabi and to adjust to this level and earn minutes with one of the best teams in Europe. I want to win more titles in Israel and Europe.

David Pick is a veteran pro basketball reporter covering overseas hoops and American players abroad since 2010. He covers international basketball for Bleacher Report. You can follow David Pick on Twitter at@IAmDPick. All quotes were obtained firsthand.
No comments: