It's amazing how much High School Basketball has changed & evolved over the years!

When you read the article below, you will see exactly how things have changed when a "Student Athlete" can re-classify as a Senior so that he can graduate in 2013 instead of 2014. That means that Andrew Wiggins now becomes the #1 player in the class of 2013 bumping the super talented Jabari Parker down to #2!!!

I just watched ESPN's "30 for 30" story on Ben Wilson out of Chicago's Simeon High School where Derek Rose went & where Jabari Parker currently goes to high school. Ben was a phenomenal basketball player that never got a chance to play past high school because he was shot to death. He was the #1 player in the country in 1984 and if the media was anywhere close to where it is now, we all would have known about Ben!

Prayerfully, he & Jabari will be able to see their life & hoop dreams realized!!!

Andrew Wiggins has been one of the nation's most-hyped basketball prospects for nearly four years, since he exploded on the AAU circuit while still a Canadian teenager. Since then, Wiggins has headed south to star at American prep schools, eventually landing at Huntington (W.Va.) Prep for what was supposed to be his junior season in 2012-13.


Now it'll be his senior season, thanks to a Thursday decision which shakes up the basketball recruiting classes of 2013 and 2014.
Wiggins made the announcement that he will officially "reclassify" himself as a high school senior, a move which pushes him to the top of the prospect rankings for most national recruiting services, including Rivals.com. According to Rivals national basketball recruiting analyst Eric Bossi, Wiggins move to speed up his high school career has been in the works for some time and instantly makes him the top prospect in the Class of 2013. 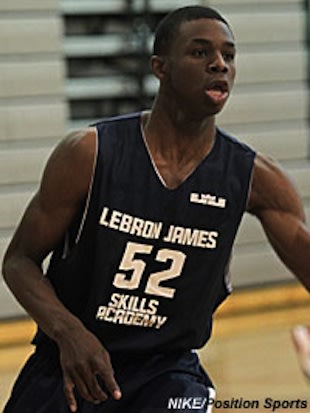 "It just happened," Huntington coach Rob Fulford told Bossi. "Andrew didn't even know for sure until a little earlier today when his parents got him word. He was waiting on his parents. That was the real wait with it. It was just a family decision."

That family decision could have a ripple effect on the prep recruiting scene, as all of the nation's top programs attempt to make sure that they can fit Wiggins on their rosters should he choose to matriculate there. The fluid yet powerful 6-foot-7 small forward has reportedly expressed early interest in Kentucky and Florida State, though that hasn't stopped the likes of legendary North Carolina coach Roy Williams from expressing interest in the latest and greatest import from the great white north.

As for the players who will be set back by Wiggins decision, none will feel the shift in focus more keenly than Jabari Parker, the Chicago (Ill.) Simeon High superstar who has been the media's focus as the top recruit in the Class of 2013 for years. Interestingly, Wiggins might even get a thank you for stealing the spotlight from Parker from the Parker family itself, which has long been cautious about the attention heaped on Jabari.

Now Parker will have to settle for being the second-most ballyhooed small forward in the senior class, not that such a move will put any kind of a damper on the heated chase for his scholarship signature. Parker has already scheduled official visits to Michigan State, Duke, Florida, Stanford and Brigham Young, though his father said earlier in October that Parker may wait to commit to a school until December at the earliest.

Regardless of the trickle down effects that Wiggins move may have farther down the overall and positional rankings, one thing is certain: It has made the Class of 2013 one fascinating group of top basketball prospects. After all, what odds could there be for having a Canadian and a Mormon as the top two prospects in the class?